The following blog was posted by PetaPixel and offers a useful corrective to the notion that consumers are “better” or more “valid” critics than the pros.
On the other hand, before the pros get too cocky, there are plenty of examples of them getting it wrong too…

Addendum: And then of course, you might feel that the online critics were 100% right, and that the picture is overvalued by buyers who knew the fame of the photographer.

You may care to read this alongside my post on the latest JK Rowling. 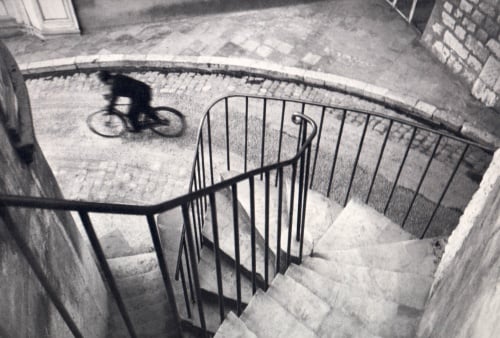 Back in 2006, Flickr user André Rabelo submitted the above photograph to the group pool ofDeleteMe!, a group whose members vote on photos to weed out any photos that aren’t “incredible pictures, amazing, astonishing, perfect”. Sadly, the photograph was very quickly removed by popular vote.

Here are some of the criticisms the voters had:

When everything is blurred you cannot convey the motion of the bicyclist. On the other hand, if the bicyclist is not the subject– what was?

Why is the staircase so “soft”? Camera shake? Like the angle though.

so small. so blurry. to better show a sense of movement SOMETHING has to be in sharp focus

This looks contrived, which is not a bad thing. If this is a planned shot, it just didn’t come out right. If you can round up Mario, I would do it again. This time put the camera on a tripod and use the smallest aperture possible to get the best DoF. What I would hope for is that the railings are sharp and that mario on the bike shows a blur. Must have the foreground sharp, though. Without that, the image will never fly.

bit too blurred to be worth a save from me

Fantastic composition, but the tones and the graininess keep the photo from being great.

What’s funny about this story is that Rabelo had the last laugh — the photograph is actually “Hyeres, France, 1932″, a famous photograph by the French photographer and “father of modern photojournalism”, Henri Cartier-Bresson. Made in 1932, the photo sold at auction in 2008 for a whopping $265,000.
This just goes to show that you shouldn’t let anonymous online critics dictate how you photograph. While it’s great to receive feedback and certainly worthwhile to hear things that help you improve your technique, the criticisms you hear online are often from people who don’t know what they’re talking about, so don’t give too much weight to negative comments!