Time, Money and Wine. A personal theory of relativity 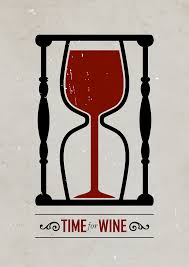 Time and money are both rather peculiar. They each share the odd quality of being simultaneously absolute and relative. Anyone who has ever lacked the means to pay a bill, or the time to complete a task, knows all about the implacability of an empty wallet or vacant top half of an hourglass. But… then there’s the relativity. The way that five minutes can feel like an hour when you are waiting for something to happen, and how, in other circumstances, 60 minutes can somehow seem to flash past in an instant. A tiny amount of money that means nothing to you or me might offer the difference between life and death for someone in the Third World in need of food, water or medicine.

Relatively speaking, a hectare of Margaux vineyard costs a huge amount more than a hectare of Médoc and even the humblest bottle of AOC Margaux can command a hugely higher price than a more lovingly- and better-made wine with the other ‘M’ word on its label. But the absolute cost of producing and packaging the two liquids can be startlingly similar.

When I was a consumer wine writer, one of my main tasks on behalf of my readers was to find and recommend bottles of wine that represented especially good value for money. Bargain Bulgarians; cut-price Corbières; Penedes for pennies… Those were the meat and drink of my columns. Naturally, I tried to intersperse them with in-depth introductions to unfamiliar wine regions and penetrating producer profiles, but neither my editors nor my readers really appreciated these nearly as much as lists of how to save a few pounds when filling that week’s shopping basket.

What I was rarely bothered about in those days was how and why those recommended bottles got to be as cheap as they were – provided they tasted good. To be blunt, I paid little more heed to their background than a fashion journalist singing the praises of clothes manufactured in Asian sweatshops. Now, with the exception of some non Fair Trade wines from South America and South Africa, wine isn’t usually produced by people on slave wages, but everything comes at a cost, and some businesses are a lot less sustainable than others. Bulgaria – and Eastern Europe in general – offers a good example of the potential unsustainability of cheapness. Consumers and critics in the UK and elsewhere were delighted to buy ludicrously inexpensive Soviet era reds made with the help of Californian expertise that was, in turn, facilitated by the eagerness of US Cola giants to barter their product on the other side of the Iron Curtain.

When that barrier was removed, the collectivist agricultural system dismantled and land redistributed, interest in the entire region evaporated at a speed that will be familiar to many pop groups after the release of their unsuccessful second album. Besides, there were bargains to be found elsewhere.

Cheapness is a dangerous long-term strategy in a capitalist world. Make and sell a product with a paper-thin profit margin and no spare cash to spend on brand-building and there’s always the looming risk that somebody, somewhere will be even more desperate to make a sale than you are. When Chinese wages rise too far for Western t-shirt and toy manufacturers, well, there’s always a factory in Bangladesh eager for the business.

But agriculture, especially wine, is less flexible. Those better paid Chinese workers may now be – probably are – making higher value solar panels rather than cheap plastic flipflops. Vineyards and winemakers, especially in the old world, find it rather less easy to adopt new skills. The Bulgarian vines are mostly still turning out an annual crop of grapes that nobody wants to buy at any kind of premium price.

The taint of cheapness is not only a concern in Eastern Europe, however. Despite China’s flurry of interest in the wines of France’s most famous red wine region, the bulk price for Bordeaux Rouge has stubbornly stuck at under 1.20 euros per litre, surprisingly close to what you might pay for bulk Minervois these days and less than the real price 20 years ago – but still roughly twice what you’d spend on some perfectly drinkable wine on the other side of the Spanish frontier.

When I consider the effort required to tend vines, grow grapes and make wine, and compare these ex-cellars prices to the ones charged for a rather easer-to-produce beverage such as say, tonic water, they seem to be simply too low.

Cheap regionally designated wine, like the €1.89 AOC Bordeaux I snapped in a French Aldi is – for whatever reason – unsustainably underpriced. Just like the burgers that cost-cutting manufacturers produced from horse instead of beef, and the Big Macs that McDonalds made using fat and trimmings ‘washed with’ ammonium hydroxide.

But ‘underpriced’ was not a term I often used as a wine critic. Unlike ‘overpriced’ which I (along with almost all of my UK colleagues) regularly dragged out to describe almost anything from the Napa Valley (or the rest of the US) or Priorat, or any wine that had caught the eye of a top US opinion-former. Time has, of course, proved us all wrong, just as it has given a huge slap around the face to everyone who suggested that Starbucks et al would never get away with charging $4 – the global average – for a cup of undistinguished coffee whose raw ingredients probably struggle to add up to 20c.

While writing this, I’m thinking of two estates in the southern half of France, growing very similar grapes on very similar land. One – whom we’ll call Dom. Trop-Cher (DTC, for short) consistently sells its wine for a much higher price than the other: Dom. Trop-Bon-Marché (DTB). Part of that difference can be attributed to slightly lower yields and the use of more new oak, but by my estimation, that might, at most, explain 15% of the extra cost. The rest is down to the philosophy of the owners. I happen to prefer the style of the DTB wines; Robert Parker, predictably favours DTC, but it’s a matter of taste. Both are similarly good. In my previous life as a critic, I praised the family behind DTB for what I saw as their lack of greed. I took too little notice of the worried look on their faces when a pneumatic press unexpectedly needed to be replaced and I positively overlooked the fact that a necessary part of their income seemed to come from renting out rooms in a gite next to their house.

Today, and particularly after reading a recent Decanter interview with Anthony Barton in which he ruefully commented on the lack of real appreciation he got for his policy of moderate pricing at Leoville and Langoa Barton, I feel rather differently.


Excuse my pedantry, if you would, but surely the term ‘overpriced’ should only be used when it is established that sufficient consumers have been exclusively deterred from making a purchase by what they perceive to be too high a cost. In other words, whatever any critic may personally think of its quality, style or packaging, a $100 Argentine Malbec, $250 Napa Cab or $1000 Bordeaux are technically ‘worth’ every penny of those prices to their buyers until those buyers stop being prepared to pay them. Like the £250,000 that 700 people have said they’ll each pay for a short flight on a Virgin spaceship.

But the thing I failed to understand, as a bargain-chasing hack, was just how close to financial failure some of the wineries I was recommending often came. I recall an Australian flying winemaker disdainfully telling me about how a well-respected Chilean had – unbelievable though it seemed – sold several tons of his best grapes to a competitor during the harvest. The way the story was recounted, it sounded precisely as though the winery owner had pimped his daughter to the local brothel.

It was a decade later that I learned the background to the deal: the neighbour had actually done the winemaker a favour by buying the fruit for a bundle of cash that enabled him to pay his vintage workers. The bank had offered no support and, without that money, the business would have gone under. Other family-owned wineries I’ve seen have been forced to sell out completely because of situations such as a UK supermarket reneging on a deal. And then, of course, there are the countless small producers who simply can’t afford to make their wine as well as they’d like, for want of the money that would pay for a little more work in the vineyard and slightly stricter selection in the cellars. As they point out, at €1.20/litre there’s not a lot of spare change in the till. Stated bluntly, far too many producers of attractively-priced wine are just one lost-customer or bad harvest away from financial disaster.

(One reason most observers fail to notice this in Europe is the proportion – over half – the wine that is actually produced by cooperatives which are still feather-bedded when compared to individual estates working in the same regions).

When you get behind the scenes you quickly realise how the producers asking the laughably high prices have not only managed to survive the recession but maintain their quality and invest in some marketing, while the fair-price brigade have struggled – and are now often in an even worse financial state than they were before the axe fell.

All of which helps to explain why, based on current evidence, if I had to invest some absolute money or time, I reckon I’d be both relatively and absolutely wiser to do so in a Starbucks franchise than a few hectares of basic Bordeaux.